With the scientific revolution of the 16th and 17th centuries that led to the great cultural movement known as the Enlightenment, these previously accepted religious doctrines were increasingly challenged as faith in God, scripture, and organized religion began to decline among the intelligentsia—that is, the educated elite. If there is no God—and therefore no guarantee of cosmic justice ensuring that the good guys will be rewarded and the bad guys will be punished—why should anyone bother trying to be good?

But is this actually contrary to what we might call moral common sense? Most of us judge actions more for their motivation than by their consequences. I could save a life at the risk of my own, and the person I save could turn out to be a serial killer. Or I could accidentally kill someone in the course of robbing them, and in doing so might unwittingly save the world from a terrible tyrant.

Consider anything you think of in terms of being "good"—health, wealth, beauty, intelligence, and so on. For each of these things, you can also likely imagine a situation in which this so-called good thing is not good after all. For instance, a person can be corrupted by their wealth. The robust health of a bully makes it easier for him to abuse his victims.

Even happiness is not good if it is the happiness of a sadist torturing unwilling victims.

By contrast, goodwill, says Kant, is always good—in all circumstances. What, exactly, does Kant mean by goodwill? The answer is fairly simple. A person acts out of goodwill when they do what they do because they think it is their duty—when they act from a sense of moral obligation. Much of the time, we're simply following our inclinations—or acting out of self-interest.

There's nothing intrinsically wrong with that, however, no one deserves credit for pursuing their own interests. It comes naturally to us, just as it comes naturally to every animal. What is remarkable about human beings, though, is that we can, and sometimes do, perform an action from purely moral motives—for example, when a soldier throws himself on a grenade, sacrificing his own life to save the lives of others. Or less dramatically, I pay back a friendly loan as promised even though payday isn't for another week and doing so will leave me temporarily short of cash. Saying that people should do their duty from a sense of duty is easy—but how are we supposed to know what our duty is?

Sometimes we may find ourselves facing moral dilemmas in which it's not obvious which course of action is morally correct. He is considered to be the most influential figure in modern philosophy, with good reason. He sparked a philosophical revolution. Immanuel Kant gave his unique spin on epistemology, metaphysics, and ethics. Most of his ideas had never come up before. Immanuel Kant was a genius and ahead of his time. His philosophical points are still debated to this day. Immanuel Kant is considered one of the most influential thinkers of modern Europe, the last period of the Enlightenment and universal philosophy.

Currently Kant continue to have effect in various disciplines such as philosophy, ethics and politics, among others. Immanuel Kant thought that the only thing that have intrinsic value is good will. Kant believed that an action is correct only if is out of the parameters of our moral duties and such actions have to be right.


Kant offers the categorical…. Eighteenth century German philosopher Immanuel Kant solidified his thoughts on morality, and created a step-by-step, systematic plan for the human being to follow in order to achieve goodness. Each of these theories has pros and cons, but it up to us to decide which is best for use in every day life.

This paper will look at deontology.

First, I will define what is deontology. Second, I will run a case study of deontology examining the drug dealers in the documentary the house I live in. Third, and finally I will argue whether, in every case, we should accept deontology as the correct form of moral philosophy. The theory of deontology is best…. Schneewind 'Modern Moral Philosophy'. However, the view that there is one way to live that is best for everyone and the view that morality is determined by God, came to be questioned, and it is this that led to the emergence of Modern moral philosophy.

The moral debates continued to see good as merely that which gives happiness or pleasure. His ideas presents good morals that would lead to a better world. From the idea of moral equality, which amounts to the claim that all rational agents have equal moral status, one is meant to arrive at both a positive and a negative principle of impartiality:.

That is, such considerations provide reasons to acknowledge in maxims and action the claims that the morally legitimate ends of others particularly their needs have on us. This rather substantive impartiality principle, however, does not follow from the commitment to the abstract and formal idea of moral equality. Having equal moral status does not imply that everyone who is similarly situated has reasons to adopt and pursue general ends.

More importantly, this, in turn, does not imply that anyone has reasons to pursue the legitimate ends of others and that one agent's ends can give rise to claims on other agents. A situation in which everyone only has reasons to pursue their own ends is perfectly compatible with a commitment to moral equality. Rather than being derived from the idea of moral equality, this impartiality principle, which effectively builds in something that is very close to the duty of beneficence, appears to be simply stipulated.

Relatedly, two problems arise when it comes to the supposed derivation of the duty of beneficence from the principle of impartiality. 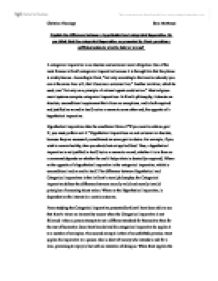 First, as they note, "this principle presupposes that there are humanity-based reasons for individuals to set and strive to achieve ends" p. This, however, is problematic.


The ends that are to be promoted through beneficence are meant to be discretionary ends. They are desire-based, not humanity-based. This brings out that the impartiality principle put forward by Timmons and Smit let alone the idea of moral equality is not a suitable principle for deriving beneficence. Far from it being the case that the reasons are shared by everyone who is relevantly situated, there is a crucial difference between the reasons that an agent has to pursue his or her own ends and the reasons that people have to be beneficent.

What You Should Know About Kant's Ethics in a Nutshell

Second, humanity-based reasons, which derive from non-discretionary ends, are meant to be superior to desire-based reasons, which derive from discretionary ends. Yet, it is not clear how this is meant to apply to an imperfect duty, such as the duty of beneficence, without giving rise to an unduly demanding duty that requires one to always give priority to the happiness of others over one's own merely prudential ends.

The principle of impartiality contains the parenthetical remark ' especially the needs ', which might be taken to partially mitigate concerns of demandingness, however it is far from clear how a restriction to, or special concern with, needs would follow from the principle of moral equality. Timmons and Smit indicate that they consider reasons that relate to imperfect duties to be favouring rather than requiring reasons cf. This, however, is not satisfactory. On the one hand, the notion of superiority has no clear interpretation in the case of favouring reasons at any rate none that would not have radically demanding implications.

On the other, it is not clear how the bifurcation into favouring and requiring reasons is to be derived from the single requirement to treat humanity as an end-in-itself rather than merely as a means, especially given that humanity is to be understood as a "limiting condition" and is to be construed merely "negatively" as something against which one is not to contravene Groundwork, , Thanks to Mark Timmons and Houston Smit for helpful comments.